COLUMBUS, Ohio (AP) Brock Nelson scored his third game-winning goal of the season and the New York Islanders extended their winning streak to three games with a 3-2 victory over the Columbus Blue Jackets on Friday night.

Kent Johnson had a goal and an assist, Yegor Chinakhov scored and Johnny Gaudreau finished with two assists for Columbus, which has lost three of its last four games, all at home. Joonas Korpisalo had 21 saves in his third consecutive loss.

Wahlstrom's wrister from between the circles with two and a half minutes left in the first put the Islanders up, and Pageau doubled the lead with his team-leading fourth power-play goal about eight minutes into the second period.

''I thought we were good in the first period,'' Islanders coach Lane Lambert said. ''We were moving our feet. We were on the forecheck. I give our guys full credit. They came to play.''

A pair of Islanders penalties late in the period helped Columbus. Chinakhov scored from just above the left circle on a 5-on-3 power play with six minutes left, and Johnson pulled Columbus even with a power-play goal just 33 seconds later.

''I feel like we're in pretty good control for the first 30 minutes, up until the power play,'' Nelson said. ''There were a couple minutes there with all the stuff that happened and all of a sudden, you're back in a tie hockey game. It was a good response by us to weather that.''

Nelson gave the Islanders the lead for good six minutes into the third, intercepting a clearing pass along the boards skating 4-on-4 and sending a shot high over Korpisalo for his team-leading 10th goal.

Despite the loss, Blue Jackets coach Brad Larsen was encouraged.

''We played well,'' Larsen said. ''There's not much to criticize tonight. A pretty solid game again. It's coming.''

The Blue Jackets Saturday game against the Predators was postponed due to ongoing issues related to a water main break at Bridgestone Arena in Nashville. A makeup date will be announced.

Columbus native Carson Meyer made his season debut for the Blue Jackets after spending time with the Cleveland Monsters, posting a stat line of 6-12-18 in 15 games. Meyer came in for Emil Bemstrom, who was sent down to the Monsters.

The Islanders' Kyle Palmieri did not make the trip to Columbus and remains day-to-day with an upper-body injury.

Barzal primary assist on Wahlstrom's goal extended his point streak to seven games. His secondary helper on Pageau's goal was his 23rd assist in 22 games. Simon Holmstrom, recalled Nov. 23 from Bridgeport, recorded his first NHL point with the secondary assist on Wahlstrom's score. Gaudreau's assists on goals by Chinakhov and Johnson gives him a 2-10-12 line in the last 10 games

Johnson's power-play goal was his second of the season, good for third among NHL rookies. He is also third for rookie goals with five. 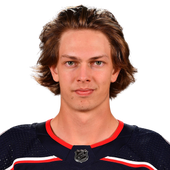 Blue Jackets
STARS OF THE GAME