Mitch Marner scored first for Toronto to stretch his point streak to 15 straight games and extend the longest run in the NHL this season. Zach Aston-Reese and William Nylander each had a goal and John Tavares had two assists for the Maple Leafs, who started their four-game trip Wednesday by stopping New Jersey's 13-game winning streak.

Matt Murray stopped 25 shots and improved to 4-0-1 with 11 goals allowed in five games since returning from a midsection injury.

''The confidence we're getting from our goaltending really is fueling a lot of things for our team,'' coach Sheldon Keefe said. ''We just feel like we can win no matter what.''

Kirill Kaprizov scored on a power play and Matt Boldy had the second goal for the Wild, who welcomed newly acquired right wing Ryan Reaves to their heavy third line and kept up the offensive momentum from a 6-1 win Wednesday over Winnipeg.

With the Wild net empty, Mats Zuccarello scored 6-on-5 with 3:34 left to cut the lead to one. But Murray was up to the task of finishing it off, knocking away a high-danger shot by Kaprizov in the final seconds.

''If he hits his spot, it makes it a much harder save. So I think I got a bit fortunate on that one,'' Murray said.

Fleury, who made 23 saves, missed the previous three games with an upper-body injury.

In the middle of the first period, Aston-Reese pivoted around defenseman Matt Dumba and sneaked in a bad-angle shot that zipped between the goalie's pads. Aston-Reese looked pleasantly surprised the puck went in during the celebratory scrum with his linemates. Fleury said it was his fault, ''a stupid goal.''

The 20-year veteran Fleury was a bit out of position on Jarnkrok's winner. He made a big blocker save on a shot by Mark Giordano that ricocheted in front for an easy knock-in of the rebound.

With 6:37 left, Nylander's slap shot from the slot zipped past Fleury's stick.

''It took a little time, a few shots to get in to get back to how I wanted to feel,'' Fleury said.

The Wild played their customary day-after-Thanksgiving matinee and gave their fans plenty to shout about. Kaprizov's tip-in of a rebound gave him a team-high 12 goals. Boldy's one-timer off a pass from Alex Goligoski was a clinic in how to work a rush.

Connor Dewar had a breakaway in the closing minute of the second period that Murray stonewalled with his right pad, preventing the Wild from tying the game before the break.

Toronto improved to 8-1-3 in November despite a long list of injuries, with defensemen Jordie Benn, T.J. Brodie, Carl Dahlstrom, Jake Muzzin and Morgan Rielly sidelined. The Maple Leafs blocked 22 shots and did plenty of dirty work in the offensive zone, too.

''We're not scoring the prettiest of ways right now, but we're getting guys around that net. We're getting second opportunities, and when the plays are there, we're making them,'' Marner said.

The crowd observed a pregame moment of silence for Hall of Fame defenseman Borje Salming, who played 16 seasons for the Maple Leafs and died at 71 on Thursday. He had Lou Gehrig's disease.

The Maple Leafs wore a shoulder patch in Salming's memory, and Nylander's goal - the 148th of his career - tied him with Salming for second place in franchise history among Swedish players.

Murray dislodged his net three different times, and the Wild believed at least one was intentional. Murray said he didn't know why the posts kept coming loose.

''We could get more opportunities and all of a sudden it stalled out and momentum's gone,'' coach Dean Evason said. ''I don't understand it.'' 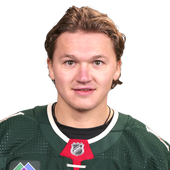 Wild
STARS OF THE GAME

Wild
ALL PLAYS
SUMMARY
GOALS
PENALTIES
All times are US/Eastern.
Around the Web Promoted by Taboola
Hide View
NHL Scores