ST. LOUIS (AP) Anders Lee and Brock Nelson each had a goal and an assist, sending the surging New York Islanders to a 5-2 victory Thursday night over the reeling St. Louis Blues.

The Islanders have won five consecutive games while the Blues have lost six straight in regulation for the first time since February 2018.

''The mood is up. The guys are feeling good about themselves,'' New York defenseman Noah Dobson said. ''I think our team is going well. We have four lines rolling. We keep coming at you. We're in a good stretch right now. We've got to keep it going.''

The Blues, who opened the season with three wins, have been outscored 30-11 during their downturn.

''You can't get sucked into looking at records. That's a good team on the other side,'' said Nelson, whose two points gave him 400 for his career. ''There's a lot of talent there. They're a dangerous team. It may not be going as well right now as they'd hope for. This is a tough place to play and they're a tough team.''

Vladimir Tarasenko had a goal and an assist for the Blues. Robert Thomas also scored.

''(I'm) in shock right now,'' Thomas said. ''What's the mood? It's tough. Everyone's down, everyone's disappointed in ourselves.''

Ilya Sorokin (5-3-0) has started in five of the Islanders' seven wins. He stopped 32 shots.

Jordan Binnington (3-4-0) has started seven of the Blues' nine games, including all three of their wins. He faced 29 shots, allowing four goals.

The Islanders scored four straight goals in the second period for a 4-1 lead.

New York tied it 1-all just 14 seconds into the period. Parked in front of the net, Palmieri tipped in a shot from Dobson.

''I thought we weathered the storm pretty well,'' Islanders coach Lane Lambert said about the first period. ''We had a real good start to the second period. I did like our resolve.''

The Islanders went ahead on a power-play goal by Nelson at the 5:06 mark.

Bailey then poked in the puck from the side of the net at 7:05. A turnover by Thomas at center ice turned into a 2-on-1 Islanders rush. Binnington made the initial save but the puck laid by the post and Bailey knocked it in.

The Blues have been outscored 18-6 in the second period this season.

A goal by Nick Leddy at 15:19 after a wild scrum in front was disallowed by officials due to goaltender interference.

Tarasenko scored from a tough angle at 8:17 of the first period. Torey Krug shot the puck off the end boards to Tarasenko, who fired it into the upper part of the net. Tarasenko has 17 points (10 goals, seven assists) in 16 games against the Islanders.

''I thought we competed hard tonight,'' Blues coach Craig Berube said. ''There was a lot of good things. Yeah, the goals, they're not coming. They're not there. Chances. But I get it. We're not producing very much.''

St. Louis Cardinals All-Star first baseman Paul Goldschmidt was shown on the videoboard wearing a Blues jersey and taking in the game.

Cardinals mascot Fredbird was on hand to help fans sing ''Happy Birthday'' to Louie, the Blues' mascot. Back on Nov. 3, 2007, a blue bear was named Louie by the fans. He was given his very own game jersey and he's been entertaining fans ever since.

New York LW Anthony Beauvillier got his 100th career assist. ... Islanders LW Matt Martin remains away from the team on paternity leave. ... Healthy scratches for the Blues included Nathan Walker and Calle Rosen. ... Healthy scratches for the Islanders included Ross Johnston, Robin Salo and Nikita Soshnikov. ... Blues LW Brandon Saad (upper body) is day-to-day. He has missed the past five games. He was on the ice for an optional skate Thursday and will join practice Friday.

Islanders: At the Detroit Red Wings on Saturday.

Blues: Play at Boston on Monday, beginning a stretch with five of their next six games away from home.

NYIIslanders
STLBlues
STARS OF THE GAME 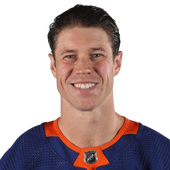 Blues
STARS OF THE GAME

Blues
ALL PLAYS
SUMMARY
GOALS
PENALTIES
All times are US/Eastern.
Around the Web Promoted by Taboola
Hide View
NHL Scores