NEW YORK (AP) Ilya Sorokin made 23 saves and Brock Nelson had a goal and an assist, leading the New York Islanders to a 2-0 victory against the Detroit Red Wings on Friday night.

Anders Lee also scored and Kyle Palmieri had two assists, helping New York stop a six-game slide. It was Sorokin's fourth shutout of the season and No. 14 for his career.

''We did a good job breaking pucks out, getting up ice and getting on the forecheck,'' Palmieri said. ''That's kind of our bread and butter as a team, creating offense off that forecheck is how we are going to be successful and we were able to do that tonight.''

Detroit had won two in a row. Magnus Hellberg made 26 stops for the Red Wings in their final game before their bye week ahead of the NHL All-Star break.

Lee opened the scoring 4:44 into the second period, redirecting the puck past Hellberg for his 18th goal of the season. He also became the 16th player in franchise history to reach 400 points.

''There were some moments in the stretch that we were playing good hockey,'' Lee said in reference to the team's recent struggles. ''We just weren't putting it together and shooting ourselves in the foot too many times. It was putting us behind in games or costing us late.''

New York improved to 16-7-2 when scoring the first goal.

Nelson got his 19th goal 4:31 into the third period. He tossed a soft wrist shot from near the blue line and Lee screened Hellberg.

It was the first third-period goal for the Islanders in 12 games, dating to Jan. 3.

''I know they're not in a playoff spot right now, but you put those guys in the playoffs right now against any team they are a tough out,'' Red Wings forward David Perron said of the Islanders. ''They're always tough to play against and we got to find a way to be comfortable in those games. If we want to be part of those 16 teams, that's the type of hockey that you end up playing more often than not.''

Sorokin improved his impressive record on home ice to 32-14-6 since joining the Islanders ahead of the 2020-21 season. His .929 save percentage is the best on home ice in NHL history (minimum 40 home games), per the Islanders.

''The way we played without the puck, you can probably count on one hand how many scoring chances we gave them,'' Islanders forward Zach Parise said. ''The lack of opportunities we gave them, it's something we need to continue to do.''

Palmieri has four assists in three games since returning to the lineup after missing 27 of 28 games between Nov. 23 and Jan. 23.

The Islanders have scored three times with the man advantage in their last 62 opportunities over the past 23 games, including an 0-3 performance against the Red Wings. New York entered Friday ranked 30th in the NHL on the power play with a conversion rate of 16.1%. 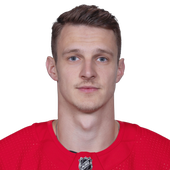