Brayden Schenn lifts Blues past Maple Leafs, 6-5 in SO

TORONTO (AP) Brayden Schenn scored on the power play and again in the shootout to give the St. Louis Blues a 6-5 victory over the Toronto Maple Leafs on Tuesday night.

Schenn put away the winner in the tiebreaker after Robert Thomas and Pavel Buchnevich scored on Maple Leafs goalie Ilya Samsonov.

Brandon Saad scored twice, including one short-handed, to help undermanned St. Louis get to 18-17-3. Jordan Kyrou and Josh Leivo also scored, and Jordan Binnington made 20 saves.

''We did some good things offensively,'' Blues coach Craig Berube said. ''Couple power-play goals and short-handed, so special teams were a big factor tonight, for sure. I thought we played pretty solid for two periods and it still was a tight game.''

''We were a little sloppy in the second period and they got a couple of goals,'' Nylander said. ''We were able to score and battle back but kind of a sloppy game from our side.''

Kyrou gave St. Louis a 3-1 lead 3:09 into the second. As Kyrou's goal was still being announced over the public-address system, Nylander scored for Toronto.

Leivo picked up his own rebound off Samsonov's pad at 9:32 to give the Blues a 4-2 lead. Bunting replied for Toronto 17 seconds later, putting a rebound past Binnington. A minute later, Saad snapped a shot from the slot to once again give St. Louis a two-goal lead.

Matthews cut into the Blues' lead again shortly after to make it 5-4. Bunting tied it at 5 on a power play 7:55 into the third period. 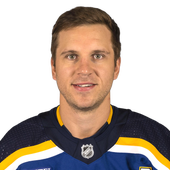