''We just did the things we preach as a team,'' Quinn said. ''We were playing fast and pressuring pucks and getting rewarded for it.''

Nick Bonino, Kevin Labanc and Oskar Lindblom scored for the Sharks, who have lost three in a row and six of their last seven games. Aaron Dell made 32 saves.

Sabres defenseman Rasmus Dahlin had two assists and a big, clean hit on Matt Nieto in the second period. San Jose's Timo Meier tried to retaliate by going after Dahlin moments later, but missed and crashed into the boards.

''That's one of the biggest hits I've seen in a while,'' defenseman Mattias Samuelsson said. ''For how skilled he is and how talented he is, for him to have that in his game too it's pretty impressive. And I think it gave us all a boost.''

Peterka made it 2-2 just 16 seconds into the second period on a partial breakaway. Peterka raced down the left wing and beat Dell to the far side. After scoring against Colorado on Thursday night, the 20-year-old has scored in back-to-back games for the first time in his career.

Skinner gave Buffalo a 3-2 lead four minutes later on his 12th goal of the season. Skinner showed good patience in moving from right to left, waiting for Dell to commit before depositing the puck into the net.

Quinn made it 4-2 with 6:15 left in the second on Buffalo's second power-play goal of the evening. Quinn had some nifty stick-handling before beating Dell with a wrist shot. Quinn's second goal came with 8:37 remaining on an odd-man rush.

Sabres: At Columbus on Wednesday night.

SJSharks
BUFSabres
STARS OF THE GAME 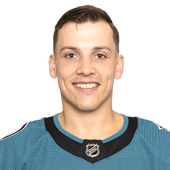