Andrew Cogliano and Dryden Hunt also scored for the Avalanche, and Manson added an assist.

Colorado was called for five minor penalties in the second period, but was able to kill off four of them. Joe Pavelski got the lone power-play goal for Dallas, which outshot Colorado 42-36.

''It was a lot of shots but I feel like we were playing a really, really good game,'' Georgiev said. ''We had a lot of penalty-kill situations in the second - that's when they had some of their most dangerous chances - but 5-on-5 I think we played much better.''

Scott Wedgewood stopped 32 shots for the Stars, who were coming off an overtime loss at home to Winnipeg. Jason Robertson had an assist after three straight multi-goal games.

Both teams were scheduled to play the second of a back-to-back, but only Dallas was in action Friday night. Colorado's scheduled game at Nashville on Friday was postponed due to a water main break at Bridgestone Arena.

''Playing back-to-back against a rested Colorado team, we needed to get through the first 10 minutes and we were down 2-0,'' Stars coach Peter DeBoer said. ''If we get through that even maybe it's a different game.''

The Avalanche capitalized on an early power-play chance when MacKinnon scored off a turnover at 2:05 of the first, his sixth of the season. Manson made it 2-0 with 6:09 to go in the period, and then spent a chunk of second period in the penalty box.

He drew three minors, one that led to Pavelski's goal at 8:13 that cut the lead to 2-1. Colorado survived four straight minutes of penalty time on two separate minors.

''I don't love all the penalties but besides that I thought he was good,'' Avalanche coach Jared Bednar said of Manson. ''Physical, he was up in the play a few times, he had a goal and an assist, defended hard and did a nice job on the penalty kill.''

Manson appeared to draw a high-sticking penalty on the Stars in the second period but the referee didn't see the infraction.

''I was a little bit surprised,'' Manson said. ''When you get smacked in the nose and you go down usually you get it. I don't know if they thought it was the bouncing around in there. It's a fast game, so you can't can't blame him for everything.''

Hunt scored 2:30 after Pavelski to restore the two-goal lead and Cogliano scored when Logan O'Connor's shot went off of him and in at 7:01 of the third.

''I felt like they were on us early then we got our game going and the second period was good,'' Pavelski said. ''We were on the power play enough making some plays. We got that score within one there and we had opportunities to keep coming at them. It would have been nice to get another one there.''

NOTES: Dallas D Jani Hakanpaa was bleeding after being hit in the face by Sampo Ranta's shot early in the first period. He went straight to the locker room. He returned wearing a full-face clear mask. ... Artturi Lehkonen assisted on Manson's goal in the first period to extend his points streak to nine games.

Colorado: At Winnipeg on Tuesday night to start a four-game trip. 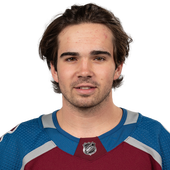