TORONTO (AP) Auston Matthews is starting to heat up.

Matthews' second goal of the game came on a power play in the second period and lifted the Toronto Maple Leafs to a 2-1 win over Boston on Saturday night, snapping the Bruins' seven-game winning streak.

''Trying to create, trying to possess the puck as much offensively and obviously keep the puck out of our own end,'' he said. ''It's a challenge at times. Just trying to get rolling.''

Mitch Marner had two assists for Toronto (6-4-2), which has won two straight after dropping four in a row as part of a sluggish October.

''Found another level tonight,'' he said. ''We knew that Boston was going to demand our absolute best.''

Ilya Samsonov made 13 saves before leaving the game after two periods with a knee injury. Erik Kallgren stopped seven shots the rest of the way.

''Not many teams in the league are gonna have three goalies injured in their system and feel comfortable,'' Keefe said. ''But it's the reality.''

Brad Marchand scored on a penalty shot in the second period for Boston. Linus Ullmark made 26 saves for the Bruins, who entered as the NHL's top team based on points percentage.

''I don't think we played with the puck as much as we would like,'' said Boston centre David Krejci, who returned following a three-game injury absence. ''Couldn't wear them down.''

Matthews, who led the league with 60 goals last season on the way to capturing his first Hart Trophy as MVP, had scored just once in the first seven games this season, but now has five goals in his last five contests.

He broke 1-all tie at 14:07 of the second period with his second of the game on a simple tap-in at the lip of Ullmark's crease for his sixth of the campaign. The goal followed a terrific individual effort by William Nylander on a power play.

''He just kind of went for a walk there,'' Matthews said of Nylander. ''Put it right on tee for me.''

The Maple Leafs then killed off two Boston power plays with desperate defending that continued late with Ullmark on the bench for an extra attacker.

Coming off Wednesday's victory over Philadelphia that snapped a four-game slide Toronto opened the scoring at 7:19 of the first when Matthews fooled Ullmark after the Bruins goaltender lost track of the puck behind his net.

With the Maple Leafs down a man against the NHL's highest-scoring team, T.J. Brodie tripped Marchand on a breakaway to set up the winger's slick deke that had Samsonov completely fooled to tie the game for the Bruins.

Marchand's fourth goal in four games was the 800th point of his career, making him the seventh player in franchise history to reach the milestone. The 34-year-old also tied Mario Lemieux for second all-time with his sixth successful penalty shot, one behind Pavel Bure's record seven.

The Maple Leafs lost Nicolas Aube-Kubel on waivers to the Washington Capitals. The 26-year-old winger signed in the summer after winning the Stanley Cup with Colorado, but never found his footing in Toronto. Aube-Kubel didn't register a point in six games for Toronto.

Toronto: At Carolina Hurricanes on Sunday. 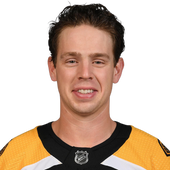