TORONTO (AP) John Tavares had his 11th career hat trick and added an assist as the Toronto Maple Leafs snapped a four-game skid with a 5-2 victory over the Philadelphia Flyers on Wednesday night.

''He was on it,'' said Maple Leafs center Auston Matthews, who had a goal and an assist. ''Made some pretty incredible plays. And obviously, his second one was just special.

''Great game by him leading the way.''

''Whether it's myself or some of some of our other core guys (we want) to be difference-makers,'' said Tavares, who scored three times in a game for the first time since March 2019. ''No question you want to come out and have a strong game today.''

''Effort was there,'' Farabee said. ''Execution could have probably been a little bit better.''

The Maple Leafs returned home Sunday after a 1-2-2 road trip that included overtime losses to the San Jose Sharks and Anaheim Ducks.

Playing the second of a back-to-back after a 1-0 overtime loss to the New York Rangers a night earlier, the Flyers opened the scoring at 13:09 of the first period when Farabee scored his third of the season.

Sandstrom, who was looking for his first career NHL victory in his eighth appearance with Carter Hart getting a rest, was beaten by Matthews on his own rebound from close range on another man advantage at 16:40.

Tavares then ripped a one-timer that hit Konecny's stick off a William Nylander feed with 1:27 remaining in the period for a 2-1 lead.

Aston-Reese scored his first of the season, and first for Toronto at 2:49 for a 3-1 lead.

Tippett got the Flyers back within one on a power-play gdoal at 7:01.

Tavares added some insurance at 12:24 when he stepped around defenseman Travis Sanheim before scoring off his own rebound. Toronto's captain then completed his hat trick on a power play with 5:37 left in regulation after Sandstrom lost a skate blade and was out of position.

''It's been a little while,'' Tavares said of his three-goal performance. ''Any time you have nights like this it's a team effort.''

Maple Leafs winger Pontus Holmberg made his NHL debut. Selected 156th overall at the 2018 draft, the 23-year-old played four professional seasons in Sweden before joining the American Hockey League's Toronto Marlies at the tail end of 2021-22. ... Leafs defenSeman Timothy Liljegren is expected to make his season debut this weekend. The 23-year-old, who had hernia surgery in September, put up five goals and 23 points in 61 games last season.

Philadelphia: At Ottawa Senators on Saturday. 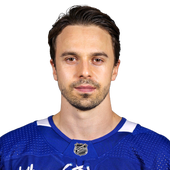