LOS ANGELES (AP) Kevin Fiala had a goal and an assist, and Adrian Kempe and Viktor Arvidsson scored power-play goals in the second period of the Los Angeles Kings' 4-2 victory over the Toronto Maple Leafs on Saturday.

Gabriel Vilardi also scored during the Kings' three-goal second period, and captain Anze Kopitar had two assists. Cal Petersen made 26 saves in an encouraging bounce-back victory for Los Angeles, which had lost three of four after a solid start to the season.

''Special teams are huge always, and the fact that we were able to come on top of that is big, especially against this team,'' Kopitar said. ''I don't think we gave up too much. We put up four again and were playing the checking game that we need to play, and the result is there.''

Fiala came through with another big offensive game in his first season with the Kings, highlighted early in the third period when he robbed Rasmus Sandin of the puck and skated in on a breakaway for the game's final goal. The prolific Swiss scorer has nine points in 10 games for LA, including three multi-point outings so far.

''Obviously, Kevin coming in has added a dimension,'' Kings coach Todd McLellan said. ''I thought him playing in the position he did tonight balanced things out a little bit more. He's been able to create with workers and creative players in his career, so he did a real good job there.''

Petersen also had his best performance after yielding 12 goals in his first seven periods of action this season.

Captain John Tavares had a power-play goal and Pierre Engvall also scored for the Leafs, who have lost three straight on their West Coast swing.

''We lost confidence a little bit the last three games,'' said Leafs goalie Ilya Samsonov, who stopped 25 shots. ''We need to (get it) back. ... Hard to say (why), but whenever you've lost three games in a row, for sure your confidence will be lowered. You don't have more smiles.''

Tavares stuffed home his fourth goal of the season in the first period on the rebound after William Nylander shot the puck off the back boards. Although Toronto scored a game's opening goal for only the third time in nine games this season, the Leafs struggled to get the puck out of their zone for long stretches of the Kings' strong second period.

Los Angeles claimed the lead with a pair of power-play goals. Kempe, who played his 400th career NHL game, put a one-timer into the top corner off a cross-ice pass from Fiala before Arvidsson cashed in a setup from Phillip Danault exactly six minutes later.

Vilardi then sneaked into the slot and buried a remarkable backhand pass from behind the net by Kopitar, the franchise's career scoring leader.

''I think for the most part, we're getting the other team's best version of themselves,'' Toronto coach Sheldon Keefe said. ''LA is coming off a tough loss. They were going to be dialed in defensively here after giving up six the night before. They made it hard for us to get off the wall. I thought we spent too much time on the boards. Yet I thought at 5-on-5, it's a pretty even hockey game. The difference is special teams and you know, we did give them some gifts for goals, you know, that they didn't necessarily give us so that's really the difference.''

Engvall trimmed the deficit to 3-2 late in the second with his first goal of the season off a loose puck in front after a Kings turnover.

Leafs defenseman Filip Kral made his NHL debut with 16 shifts, including time on Toronto's penalty kill. Kral apeared in 71 games with the AHL's Toronto Marlies over the past three seasons. 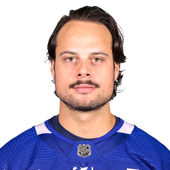 Kings
STARS OF THE GAME

Kings
ALL PLAYS
SUMMARY
GOALS
PENALTIES
All times are US/Eastern.
Around the Web Promoted by Taboola
Hide View
NHL Scores