Bailey snapped a tie in the second period, and the Islanders set an NHL record for successful penalty kills to begin a season in a 6-2 victory over the Carolina Hurricanes on Friday night.

''The guys in here knew how much this meant to me,'' Bailey said. ''They all stepped up and played a (great) game.''

Brock Nelson had two goals in the third period for the Islanders, who won for the first time in three road games this season. Oliver Wahlstrom and Matt Martin also scored before Zach Parise added a short-handed empty-netter.

The Islanders seemed inspired by Bailey.

''Those things seem to happen to the guys who do things the right way,'' teammate Cal Clutterbuck said. ''I'm glad I was here for that.''

The 33-year-old Bailey made it 3-2 with 3:34 left in the second, capping a stretch of three goals combined for the teams in less than two minutes.

''Everyone is thrilled for Josh,'' Islanders coach Lane Lambert said. ''His career, his successes, what a better what to cap your 1,000th game doing something like that.''

Mathew Barzal and Anthony Beauvillier each had two assists for New York.

Islanders goalie Ilya Sorokin made 32 saves after stopping 41 shots in a 3-0 victory over the New York Rangers on Wednesday night.

With three more penalty kills, the Islanders haven't allowed a power-play goal in their first eight games, the first team in league history to accomplish that feat.

Martin Necas and Brent Burns scored for the Hurricanes, who played at home for the first time in more than two weeks. They weren't able to duplicate the solid play that contributed to a 3-1-1 road trip. Frederik Andersen stopped 26 shots.

''Once we got behind, I just felt like we were trying almost too hard,'' Hurricanes coach Rod Brind'Amour said.

The first goal occurred when Barzal led a transition sequence and passed the puck back to Walstrom, who drilled the puck past Andersen. It was Wahlstrom's fourth goal of the season, but he had gone four games without a point.

Necas scored on a give-and-go with Brady Skjei 8:57 into the second, cutting down the slot to secure the goal.

The teams then combined for three goals in a 1-minute, 57-second span. Martin put the Islanders back on top when he cleaned up a Carolina turnover and blasted a shot past Andersen.

Burns, a veteran defenseman, posted his first goal with Carolina on a shot from inside the blue line. Bailey scored 51 seconds later.

The most impressive New York stretch came with a 5-on-3 penalty kill late in the second period, a sequence that included center Jean-Gabriel Pageau on an extended shift without his stick. The Islanders are 28 for 28 on penalty kills, marking a franchise record to start a season.

''The kill did a tremendous job there,'' Nelson said. ''The turning point, giving us the momentum going into the third period.''

COUNT TO A THOUSAND

Bailey, a right winger, became the third player in team history to reach the 1,000-game mark. A 2008 first-round pick, he's in his 15th season with the Islanders.

''Couldn't be more happy for a teammate, a friend,'' Pageau said. ''I think that's the same feeling for everyone.''

Bailey, 33, had one point this season entering the game, scoring Wednesday night against the Rangers.

Bear, who had been scratched in each of the Hurricanes' first six games, played in 58 games last season after a previous stint with the Edmonton Oilers.

In return for Bear and minor-league forward Lane Pederson, the Hurricanes acquired a fifth-round pick in the 2023 draft. 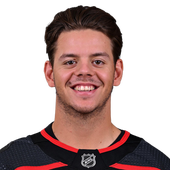