Josh Bailey also scored, and Jean-Gabriel Pageau and Adam Pelech each had two assists to help the Islanders snap a three-game losing streak.

Jaroslav Halak had 26 saves against his former team while losing for the third time in three starts for the Rangers, who have lost four straight (0-2-2) after a 3-1-0 start.

After a scoreless first, Palmieri broke through at 8:44 of the second, rifling the puck past Halak for his first of the season.

''We were able to turn some pucks over and played a little faster and that resulted in a couple more opportunities for us,'' Palmieri said.

Bailey made it 2-0 at 5:37 of the third with his first and Palmieri capped the scoring with 4:38 remaining.

''I thought we defended well. They are a dangerous team,'' Islanders coach Lane Lambert said. ''It was our overall commitment and battle level. I'm glad we were rewarded tonight.''

Sorokin made 17 saves in the first, 12 in the second and 12 more in the third for his 11th career shutout. He had seven shutouts last season.

''He was outstanding. He made a couple of saves early on,'' Lambert added. ''I thought he was terrific.''

The long-time rivals split four games last season - with the road team winning each time. However, the Islanders have now won seven of the last nine meetings and are 9-4-0 against the Rangers since January 2021.

''Every team goes through it throughout the year at some point. Our tough stretch is right now,'' Rangers forward Mika Zibanejad said. ''Just got to work through this. We have no other choice. If I know this team, and I think I do, we're not going to lay down and die.''

The Rangers have a two-game road trip ahead to Dallas and Arizona before returning home to face Philadelphia and Boston next week.

''We know we can score goals,'' Rangers defenseman Jacob Trouba said. ''We're getting opportunities, they're just not going in. It is what it is.''

Halak played four seasons for the Islanders including a 38-win campaign in 2014-15. After leaving Long Island, he spent three seasons with Boston and one in Vancouver before signing with the Rangers in the offseason to back up reigning Vezina Trophy-winner Igor Shesterkin.

''I thought we played really well - just keep going and doing your job is the focus,'' Clutterbuck said. ''And the building had a lot of energy tonight, which was good,''

Before the game, hockey historian and former Islanders broadcaster Stan Fischler was honored by having the press level at UBS Arena dedicated and named for him. The 90-year-old ''Hockey Maven'' has been working in hockey since 1954 when started with the Rangers in their press office. He has written more than 100 books on the sport, was a television commentator on Islanders telecasts for more than four decades and helped start the careers of dozens of future hockey journalists who worked for him as interns. He is still writing for The Hockey News.

Islanders forward Josh Bailey played his 999th NHL game. Lambert said many of the veteran forward's contributions often go unnoticed: ''He's a cerebral player, a very valuable guy,'' the coach said of the 33-year-old Bailey, who was the ninth overall pick by the Islanders in 2008.

Rangers: At Dallas on Saturday.

Islanders: At Carolina on Friday night. 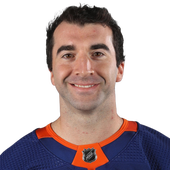