Nico Hischier had a goal and two assists, Jack Hughes also scored and Mackenzie Blackwood made 16 saves. The Devils won their second straight after opening with two losses.

''We saw what's working and what's not (in the) first two games and last two games,'' Palat said. ''We are playing better and better and hopefully we can grow as a team. . We have a lot of speed, some young legs on the team and it showed today. We were relentless, winning battles, we were just on top of them, and we skated so that was great for us.''

''We were pretty flat, especially to start the game,'' Islanders forward Zach Parise said. ''It didn't seem like we had our legs early and I think they jammed us up pretty good in the neutral zone. We weren't making great plays so we could never generate much speed.''

Hughes opened the scoring at 1:35 of the second period when he slipped a puck between the legs of Sorokin. Devils defenseman Damon Severson delivered a perfect stretch pass that allowed Hughes to get behind the defense for his first goal of the season.

Palat doubled the advantage at 8:09 with his second goal in two games. He connected again with 4:32 left in the third.

''We won the foot races, we won the transition game, we played real quick and that was our goal,'' Devils coach Lindy Ruff said. ''Really good puck support. The reason we were getting out of the zone really good was the support was from underneath. That's just a recipe for winning games.''

Lee stuffed home the puck from the top of the crease to cut the Devils' lead to 3-1 with 3:16 to go with Sorokin off for an extra attacker.

Hischier had an empty-net goal in the last minute.

''They came pretty hard, they were fast,'' Islanders defenseman Robin Salo said. ''We just weren't ready for how fast they came out. We kind of just stood a little bit too much. We just got to be quicker, more ready for their play style.''

NOTES: The Islanders scratched forwards Kieffer Bellows, Ross Johnston and Nikita Soshnikov. .The Devils scratched forwards Jesper Boqvist, Alexander Holtz and Fabian Zetterlund. ... The teams will meet again for the second of three meetings this season on Dec. 9 in Newark.

NJDevils
NYIIslanders
STARS OF THE GAME 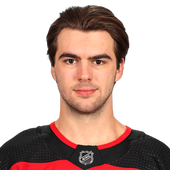