TORONTO (AP) Shayne Gostisbehere scored on a power play late in the third period and added an assist as the Arizona Coyotes beat the Toronto Maple Leafs 4-2 Monday night for their first win of the season.

Christian Fischer, Nick Ritchie and Lawson Crouse also scored for Arizona, which opened the season with two losses. Karel Vejmelka made 26 saves for the Coyotes, who blew a 2-0 lead with under eight minutes left in regulation.

William Nylander and Mitch Marner scored for Toronto, and John Tavares had two assists to reach 900 points in his career. Erik Kallgren finished with 15 saves in his first start of the season.

After the Maple Leafs stormed back to tie the score 2-2 late in the third, Gostisbehere scored on a power play with 1:33 left in regulation.

''Great win for our team in the sense of how we rebounded for these young guys to get the experience of what it takes to get two points in this league,'' Gostisbehere said. ''It's very hard.''

Toronto appeared to tie it again when Kerfoot scored with 39 seconds left, but the NHL situation room determined there was a hand pass by defenseman Morgan Rielly earlier in the sequence, negating the goal.

The Maple Leafs argued the puck hit Coyotes forward Clayton Keller at the blue line before Marner took control, but to no avail.

''Crazy that we're talking about such little things on these reviews,'' Toronto coach Sheldon Keefe said. ''Got to do a better job of not putting yourself in that spot.''

Crouse sealed the win with an empty-netter with 10.2 seconds left as boos rained down from the stands.

''Crazy third,'' Gostisbehere said. ''Fortunately we got a call.''

Kallgren, a seventh-round pick by Arizona in the 2015 NHL draft, got the call with Ilya Samsonov getting a breather and Matt Murray (groin) on long-term injured reserve.

''Games like this, you don't see a lot of shots,'' the Swedish goalie said. ''But when you see them it can be a breakaway or really good scoring chance. ... Got to stay focused.''

The Coyotes, who opened the season by getting outscored a combined 12-5 in Boston and Pittsburgh, jumped out to a surprising lead against the heavily favored Maple Leafs with 25.8 seconds left in the first period on a power play.

Ritchie, signed by Toronto in the summer of 2021 to play on the top line with Marner and Auston Matthews before falling out of favor and subsequently getting traded to Arizona, fired a shot from the slot off the post and in on Kallgren for his third goal in three games.

The Maple Leafs had a pair of man-advantage opportunities in the opening period and barely let the Coyotes touch the puck for long stretches in what looked at times like a long game of keep away, but only registered five total shots.

The Coyotes, who finished 31st in the overall standings last season and appear destined for a similar finish in 2022-23, went ahead 2-0 at 8:30 of the second when Fischer beat Kallgren between the pads from in tight.

Toronto nearly gave up another goal later in the period, but Kallgren held the fort on a Coyotes power play before the Maple Leafs were booed off the Scotiabank Arena ice at the second intermission.

The crowd only got more restless in the third period when Toronto's power play went a fourth straight opportunity without registering a shot. Kallgren followed that up by stopping Zack Kassian on a breakaway to keep his team down by two.

The Maple Leafs got another power play, and after more fan frustration, finally got on the board when Nylander picked up a loose puck and fired home his third with 7:06 left in regulation.

With the forward lines in a blender, Marner tied it just 24 seconds later when he jumped on a Coyotes turnover for his first.

The Maple Leafs lost defenseman Jake Muzzin to a neck injury in the second period. The 33-year-old missed the start of training camp with back discomfort.

Coyotes: At the Montreal Canadiens on Thursday night. 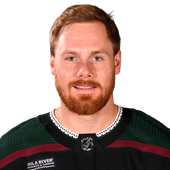