TORONTO (AP) Justin Holl scored with 1:55 left and Ilya Samsonov stepped in to stop 25 shots in the Toronto Maple Leafs' 3-2 victory over the Ottawa Senators on Saturday night.

Samsonov started in place of Matt Murray, who was poised to get the call against his former team before leaving the morning skate at Scotiabank Arena with an abductor injury.

''You never liked to see guys get hurt,'' Holl said. ''It's very painful, both physically and mentally for guys.''

The Maple Leafs announced about an hour before the game that Murray had been placed on long-term injured reserve and will miss at least four weeks. Erik Kallgren, who was knocked out of the Toronto Marlies' AHL opener Friday night, was recalled and healthy enough to dress as the backup.

''This is hockey,'' Samsonov said. ''Sometimes you get put in a bad situation. I'm ready all the time.''

Claude Giroux had a goal and an assist for Ottawa. Shane Pinto added a goal and Anton Forsberg made 29 saves.

''For the most part, we played well,'' Senators captain Brady Tkachuk said. ''But it definitely stings.''

Holl, a defenseman known for his play at the other end of the rink, buried his first of the season after pinching down into the slot.

Nylander pushed the Maple Leafs ahead 2-1 with 6:31 left off a pass from Auston Matthewsm but Ottawa tied it 1:25 later when Giroux banged home a loose puck.

Toronto picked up its first victory of the season Thursday night with a 3-2 triumph over Washington in Samsonov's debut for the Maple Leafs against the team that cut him loose in July. 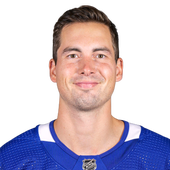