Claude Giroux had a goal and an assist, and Thomas Chabot, Drake Batherson and Derick Brassard also scored for the Senators, who won at Scotiabank Arena with fans in attendance for the first time since October 2018. Tim Stutzle added two assists.

''Any time you beat a top-end team, you build confidence,'' Senators coach D.J. Smith said. ''We just want to be consistent and play well and not worry about the standings - just do what we do. Play the right way, have some fun, win some hockey games and see what happens.''

William Nylander and Joey Anderson scored for Toronto, which was without Matthews because of a sprained knee that will keep the star center out at least three weeks. Matthews, who'll miss next week's NHL All-Star game, was injured in Toronto's 3-2 overtime victory against the New York Rangers on Wednesday night.

The Leafs dropped to 31-17-2 when the reigning Hart Trophy winner is out of the lineup since picking him first overall at the 2016 draft.

Ilya Samsonov, who was scheduled to get the night off, made a surprise start and finished with 28 saves as the Leafs suffered just their fourth regulation home loss of the season. Matt Murray was slated to see his first action in goal for the Leafs since Jan. 17, but appeared to take a shot up high from Nylander in warmups and didn't play.

''We put (Samsonov) in a terrible spot,'' Toronto coach Sheldon Keefe said. ''And then we didn't take care of him.''

Tied at 2 in the second period, Ottawa took its third lead of the night on a power play when Brassard's centering pass went in off Toronto defenseman Timothy Liljegren for his seventh goal of the season.

The Senators made it 4-2 at 16:37 when Batherson ripped his 15th past Samsonov. Tkachuk added his second of the night 3:32 into the third. Giroux made it 6-2 with five minutes left with his 17th.

''We faced a lot of adversity this year,'' Tkachuk said of the Senators, who have been without injured No. 1 center Josh Norris much of the season. ''We're just trending in the right direction.'' 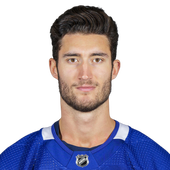