Alex Tuch and Victor Olofsson also scored for Buffalo, which had dropped five of six.

Ukko-Pekka Luukkonen made 24 stops after former Sabres goalie Ryan Miller had his No. 30 retired by the organization during a pregame ceremony. Luukkonen's performance included a key save on Islanders forward Anthony Beauvillier with seven seconds left in regulation.

Cozens beat Islanders goalie Ilya Sorokin on a breakaway after Rasmus Dahlin's floating pass sprung him for his 15th goal of the season. It was the second-fastest overtime goal in Sabres history.

''That was a crazy pass,'' Cozens said. ''We just kind of locked eye contact when I was curling and I just tried to get going as fast as I could. He made a football pass to me, a little Hail Mary, and I somehow managed to handle it.''

A smiling Miller then joined the team on the ice in street clothes and fist-bumped the Sabres. He then took a group photo with the team at the blue line.

''It's his night. He's had a spectacular career and is a deserving (Sabres) Hall of Famer,'' Sabres coach Don Granato said. ''For him to embrace the team that way was special for our guys.''

Brock Nelson and Matt Martin scored for New York, and Sorokin made 42 saves. The Islanders have lost seven of the past eight games.

''Every day is a new game,'' Sorokin said. ''If you overthink too much, It's not good. For you and for your emotional stability.''

Nelson opened the scoring at 7:19 of the first period with his 16th goal. He connected at the far post on a cross-ice pass from Anthony Beauvillier.

Tuch made it 1-1 at 8:26 of the second with his 22nd goal. He fired the puck past Sorokin after Dahlin's initial shot was blocked.

Martin gave the Islanders the lead with 1:30 left in the second when he was left alone at the far post and buried a pass from Casey Cizikas. It was his fifth goal on the season.

Olofsson made it 2-2 at 9:32 of the third when he sniped a shot past Sorokin after a pass from Casey Mittelstadt. It was Olofsson's 19th goal this season and fourth in the past five games.

''We had this whole crowd and we really wanted to do something special tonight,'' Dahlin said. ''Obviously, when he shot there, I was very tired, but very happy so it was a good feeling.''

Sorokin was named to the Metropolitan Division team for the All-Star Game in Sunrise, Florida in February. Sorokin was added in part thanks to a fan vote on Twitter. It is Sorokin's first All-Star appearance. 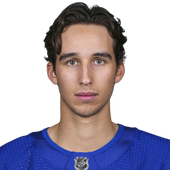