John Tavares had a goal and an assist for Toronto, which was without injured star Auston Matthews. William Nylander added two assists and Matt Murray made 32 saves.

With time winding down, Marner took a pass from Nylander on a late four-minute power play and beat Predators goalie Juuse Saros, who was caught out of position, for his 16th goal of the season. It came after a Nashville defender broke his stick.

The NHL's seventh-ranked power-play unit had flubbed its way through three earlier opportunities and a big chunk of the four-minute advantage.

''It was ugly, but won us the hockey game,'' Maple Leafs coach Sheldon Keefe said of the team's power play. ''So coach is gonna keep his mouth shut.''

Murray then held shut the door in waning seconds as the Predators pushed for an equalizer.

''I'm not sure there's ever been a game (this season) where the goaltender won us the game,'' Keefe said. ''In a lot of ways, you could say that here tonight.''

''We did a good job on the penalty kill,'' Nashville head coach John Hynes said. ''You can't give them those looks. We allowed their power play to be the difference.''

Toronto improved to 31-15-2 all-time without Matthews - absent from the lineup for the first time this season due to an undisclosed ailment.

''Auston obviously brings a lot to our team,'' said Marner, who tied Darryl Sittler's franchise record by registering at least a point in his 18th straight home game. ''The scoring ability, the leadership, the defensive play.

''Just got to take over and try and win games without him.''

The goaltenders put on a show in the first period, with Murray denying Tanner Jeannot on three consecutive chances - including a no-look desperation effort while swimming in his crease - before Saros made terrific stops on Nylander and Timothy Liljegren at the other end.

''Bit of a crazy play,'' Murray said of his saves on Jeannot. ''There was some contact after the first shot and kind of spun me around. I was looking over my shoulder and saw the guy made a pass down to the back door.

''Had to get something over there.''

Tavares then opened the scoring with 3:06 remaining in the period when he took a pass from Nylander on a 2-on-1 and slid home his 20th of the season - and the Toronto captain's fifth in the last four games.

Forsberg got the Predators back even 1:46 into the second when he snuck behind Nylander before taking a pass and deking around Murray for his 17th.

Murray made a pair of nice stops on Ryan Johansen early in the third to keep things tied 1-1 before Saros stopped Michael Bunting on a 2-on-1.

Matthews, last season's Hart Trophy winner, sat out with an issue Toronto coach Sheldon Keefe said he'd been dealing with ''for a while.'' Matthews, who took part in the Maple Leafs' optional morning skate and is listed as day-to-day, has 20 goals and 47 points in 41 games this season.

Matthews' absence opened the door for Bobby McMann, a 26-year-old from Alberta, to make his NHL debut. McMann was the AHL's reigning player of the week with six points in three games before being called up from the Toronto Marlies.

Predators: At Montreal on Thursday night to wrap up a five-game trip.

Maple Leafs: At Detroit on Thursday night to open a two-game trip. 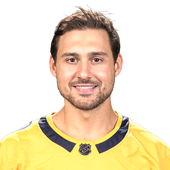