NEW YORK (AP) Kaapo Kakko scored the tiebreaking goal with 2:47 remaining and the New York Rangers rallied for a 5-3 win over the crosstown-rival Islanders on Thursday night for their eighth win in nine games.

Barclay Goodrow had a goal and two assists, Julien Gauthier had a goal and an assist, and Artemi Panarin and Vincent Trocheck also scored for the Rangers. Igor Shesterkin stopped 15 shots to get his 17th win of the season and improve to 2-7-1 in 10 career games against the Islanders.

''It's big to get two points and cap off a great run we've had and head into the (Christmas) break on a good note,'' Goodrow said. ''We've kind of found our game the last three or four weeks.''

Mathew Barzal and Alexander Romanov each had a goal and an assist, and Anders Lee also scored for the Islanders, who lost for the fifth time in six games. Ilya Sorokin finished with 29 saves.

The Rangers finished 1 for 6 on the power play with Sorokin making 12 saves while they had the man-advantage.

''There were too many penalties,'' Islanders coach Lane Lambert said. ''We just didn't get it done. They thrive off their power play.''

The Rangers tied it 3-3 at 3:00 of the third period as Gauthier's shot from the left point deflected off Goodrow in front and past Sorokin. It was Goodrow's eighth of the season.

Kakko, who had a turnover that led to an Islanders goal in the second period, gave the Rangers their first lead when he deposited a pass from K'Andre Miller from the left corner past Sorokin from the right side. It was his ninth of the season and fifth goal in eight games.

''It's tough on a young player,'' Rangers coach Gerard Gallant said of Kakko's earlier miscue. ''You're going to make mistakes, it's nice that he finished off the right way, so it makes it a lot easier for him for sure.''

Trocheck added an empty-netter with 1:32 left to cap the three-goal third period as the Rangers bounced back after a 3-2 loss at Pittsburgh on Tuesday night that ended a season-high seven-game win streak.

''I thought we played real well, in control of the game, but they kept getting the goal to go ahead every time,'' Gallant said. ''I liked our game a lot, we found a way to win, which was fortunate because their goalie played outstanding.''

Barzal gave the Islanders a 2-1 lead at 2:39 of the second period. After Josh Bailey knocked the puck away from Kakko near center ice, Barzal picked up the loose puck and sped off on breakaway, skated in on Shesterkin, got the goalie to go down and lifted a backhander over him from the left side for his fifth of the season.

Gauthier tied it at 5:30 with a backhander on a breakaway for his fifth.

Romanov gave the Islanders their third lead of the night at 8:45 with a slap shot from the left point for the 22-year-old Russian defenseman's first of the season.

''We expected to close it out (with a lead heading into the third),'' the Islanders' Jean-Gabriel Pageau said. ''It didn't go our way. ... We have to turn the page and focus on tomorrow.''

Islanders C Casey Cizikas left the game midway through the second period and did not return. 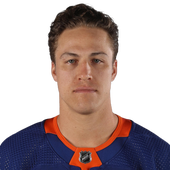