WASHINGTON (AP) Alex Ovechkin called for fans to throw hats on to the ice to celebrate a three-goal performance not from him but rather one of his least likely teammates to pull that off.

While Ovechkin will have to wait for his next milestone, Erik Gustafsson recorded his first career hat trick to help the the Washington Capitals beat the Toronto Maple Leafs 5-2 Saturday night.

All eyes were on Ovechkin at 800 goals, one back of tying Gordie Howe for second on the NHL career list, until the focus shifted to Gustafsson registering the third hat trick by a defenseman in franchise history.

''It's not going to happen too often,'' said Gustafsson, who had yet to score in his first 31 games this season since signing with Washington. ''When you're kind of feeling it, you just shoot the puck and tonight it went in.''

Ovechkin was held off the scoresheet but still had an impact. He checked Maple Leafs defenseman Conor Timmins into the bench in the second and heard plenty of ''Ovi! Ovi!'' chants as a result.

Teammates several times tried to get Ovechkin the puck for goal No. 801 and are not worried about him eventually matching and passing Howe.

Sonny Milano had three assists and Trevor van Riemsdyk and Garnet Hathaway also scored for the Capitals, who lit up former Washington goaltender Samsonov in his first game back in his old home arena. Samsonov allowed five goals on 28 shots.

Samsonov was not tendered a qualifying offer and became a free agent last summer with the team looking to make wholesale changes at the position. On Saturday night, one of his replacements put on a show while Samsonov was shaky at the other end.

Charlie Lindgren made 34 saves in his seventh consecutive start, keeping Washington in the game when Toronto tilted the ice in his direction, especially in the second period. Hathaway scored 10 seconds into the third to provide some breathing room.

''It was one of those games where I knew they were gonna have some opportunities and just wanted to rise to the occasion,'' Lindgren said.

The Capitals have won six of seven and will take two important points to continue catching up in the playoff race, but they also may have suffered another injury. Winger T.J. Oshie skated off in pain during the second period, never sat down on the bench and needed assistance getting down the tunnel.

The team said Oshie had an upper-body injury and would be re-evaluated Sunday. He missed 11 games from late October through mid-November with what was called a lower-body injury.

William Nylander and reigning league MVP Auston Matthews scored for the Maple Leafs, who have lost two in a row. Samsonov had not allowed a goal in either of his previous two starts, and his shutout streak ended at 163:46 when Gustafsson beat him midway through the first period.

''We're helping out each other in every zone we play,'' Gustafsson said. ''We're feeling it a little bit now, and we just got to keep it rolling.'' 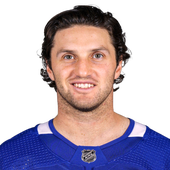 Capitals
STARS OF THE GAME

Capitals
ALL PLAYS
SUMMARY
GOALS
PENALTIES
All times are US/Eastern.
Around the Web Promoted by Taboola
Hide View
NHL Scores