TORONTO (AP) Mitch Marner has been getting plenty of attention on his march to the NHL's longest point streak in seven seasons.

Ilya Samsonov joked Tuesday it was about time he got some love as well.

Marner had two assists to extend his point streak to 23 games and Samsonov made 28 saves for his second straight shutout as the Toronto Maple Leafs thumped the lowly Anaheim Ducks 7-0 on Tuesday.

Samsonov strutted to his media scrum with the team's celebratory wrestling belt awarded to the player of the game slung over his left shoulder.

Samsonov, who missed 12 games in November because of a knee injury, also blanked Los Angeles last week and has gone 152 minutes 34 seconds without allowing a goal.

''He's been awesome,'' said Leafs forward Alexander Kerfoot, who scored twice Tuesday. ''Been there when we need them.''

A character in the locker room and with the media, Leafs head coach Sheldon Keefe praised Samsonov's commitment to his craft.

''He's got lots of personality,'' Keefe said. ''But I think what really stands out is just the work that he's put in since he's arrived in our facility and how he's embraced the program.''

Marner, meanwhile, is now three games back of Patrick Kane (2015-16) for the longest point streak among active NHLers. The winger has 11 goals and 21 assists during his red-hot run that started Oct. 27 at San Jose.

''Continues to roll,'' said Leafs captain John Tavares, who scored off a Marner setup in the first period and added an assist. ''We're just trying to focus on playing our game and what's bringing us success.''

Pierre Engvall also had a goal and an assist for Toronto (19-5-6), while Michael Bunting, T.J. Brodie and Joey Anderson provided the rest of the offense.

Connor Timmins and Pontus Holmberg each registered a trio of assists, marking the first three-point performance of each player's career as the Leafs put up at least six goals in a game for the first time this season.

''Incredible,'' Timmins, who was acquired from Arizona last month, said of Marner's streak. ''Never gets old.''

John Gibson allowed two goals on 27 shots for last-place Anaheim (7-20-3) before being replaced in the second period by Lukas Dostal, who finished with 10 stops after starting Monday's 3-0 loss against Ottawa.

The Leafs, meanwhile, have at least a point in 15 consecutive games (12-0-3) and can tie the franchise record of 16 straight Saturday at Madison Square Garden against the New York Rangers.

Kerfoot opened the scoring at 1:58 of the first period off a pass from Engvall for his third of the season.

Marner, who had an assist against the Ducks in late October in the third game of his streak, got on the scoresheet at 8:41 following a backhand feed to Tavares for the captain's 14th after Timmins kept the puck in at the blue line.

Samsonov had to be sharp at the other end on a couple Anaheim chances, including off a scramble with Mason McTavish lurking.

Brodie stretched Toronto's lead to 3-0 with his first of the season at 12:16 of the second after Dostal replaced Gibson.

Samsonov, who blanked Los Angeles 5-0 on Thursday, then stopped Max Comtois on a breakaway before Bunting scored his sixth off a rebound at 16:33.

Kerfoot got his second of the night at 2:37 of the third for the forward's first two-goal game since April 2, 2019, when he was with Colorado.

Engvall made it 6-0 with his fifth at 5:42 before Anderson scored his first with 1:40 left in regulation.

Leafs: Visit the Rangers on Thursday.

Ducks: Visit the Canadiens on Thursday. 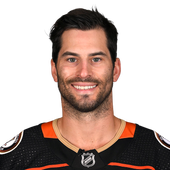