Jesperi Kotkaniemi and Jordan Staal also scored, and Kochetkov had 16 saves as Carolina improved to 5-0-2 on its current streak.

''From our standpoint, we did a lot of the things we wanted to do,'' veteran forward Derek Stepan said. ''We executed when we had the puck on our stick and defended extremely well when we didn't.''

Ilya Sorokin finished with 28 saves as the Islanders lost for the fourth time in six games.

Stastny gave the Hurricanes a 1-0 lead at 7:06 of the middle period with his first goal of the season. Brady Skjei fired a shot from the point and Andrei Svechnikov got the rebound before sliding the puck over to Stastny.

Mathew Barzal and Oliver Wahlstrom had an opportunity to break the 0-0 tie shortly before Carolina opened the scoring but Kotkaniemi hustled back into the defensive zone and broke up the odd-man rush opportunity.

''They were on top of us,'' Islanders coach Lane Lambert said. ''They had an answer for everything that we tried to do.''

Kotkaniemi doubled Carolina's advantage at 4:05 of the third period when he redirected Brent Burns' shot from the point past Sorokin for his third. Burns registered his fifth assist four games on the play.

Staal pushed the Hurricanes advantage to 3-0 when he buried a feed from Jordan Martinook at 8:49 after Islanders defenseman Noah Dobson turned the puck over behind Sorokin.

''I loved the third period,'' Hurricanes coach Rod Brind'Amour said. ''We were up by one and just kind of put the hammer down. Kept playing our game, solid two points for sure.''

The Islanders were outshot 15-6 in the third period.

''They were on us tonight,'' Islanders captain Anders Lee said. ''We weren't able to sustain some pressure because couldn't get by them enough and get in their zone to create that.''

Hurricanes forward Sebastian Aho did not play and is day-to-day with a lower-body injury. Aho is second on Carolina with 27 points (11 goals, 16 assists) in 26 games.

RETURN OF THE FISHERMAN

The Islanders debuted their reverse retro jersey. They are the last of the 32 NHL teams to introduce its version of an alternate jersey and it was the first of six times they will wear it this season. The Fisherman logo was initially unveiled as part of a complete rebranding for the organization ahead of the 1995-96 season. It was the first time the logo was worn since April 12, 1997.

Hurricanes: At Detroit on Tuesday night.

Islanders: At Boston on Tuesday night. 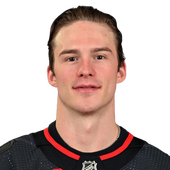