NEW YORK (AP) Kevin Lankinen made a career-high 48 saves and the Nashville Predators beat the New York Islanders 4-1 on Friday night for their seventh victory in nine games.

''Lanky knew what he was doing. We had great goaltending,'' Forsberg said. ''The reason we are happy is the play of our goaltender.''

''That's a good hockey team over there,'' Barzal said of the Predators, who are 7-1-1 in their last nine games. ''They are heavy and strong with good D. It could have gone either way.''

The Predators were coming off 4-3 comeback win at New Jersey on Thursday night in which they scored with nine seconds left in the third period and won 33 seconds into overtime.

''We played two solid games against two very good teams,? said Duchene, whose goal was the 300th of his career. ''The Islanders threw the kitchen sink at us in the third.''

Forsberg opened the scoring on a power play with 5:42 left in the first with his eighth goal of the season. Duchene and Josi assisted.

Josi, the Predators captain, made it 2-0 on a power play at 8:22 of the second. Forsberg and Duchene assisted.

Josi has 10 points in his last seven games against the Islanders, including four assists in Nashville's 5-4 home Nov. 17. The Swiss-born defenseman is four points from tying David Legwand for most points (566) in Predators history.

Lankinen made nine saves in the first, 18 in the second and 21 more in the third. The 27-year-old Finnish goaltender played the previous two seasons with Chicago.

''Kevin was great. He was really good down the stretch,'' Predators coach John Hynes said. ''It's great to see him get rewarded.''

Islanders Lane Lambert said he was pleased with the Islanders' offense which generated a season-high 49 shots. But Lankinen was there to stop all but one as the Islanders lost for only the fourth time in 12 home games.

Predators defenseman Ryan McDonagh left the game nine minutes into the third period after he was struck in the nose on a shot by Islanders defenseman Alexander Romanov. McDonagh, the former Rangers captain, wears a face shield. 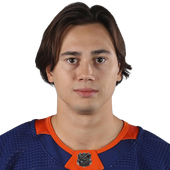